Spain’s death toll from the coronavirus pandemic jumped to 5,690 on Saturday, with 832 patients dying in the past 24 hours, according to the health ministry.

The announcement came as the number of people infected with the virus in the United States hit more than 104,000, according to a Johns Hopkins University tally, with deaths surpassing 1,700.

In Italy, more than 10,000 people have died since the start of the coronavirus pandemic, according to the latest data from the Civil Protection Agency.

A nationwide lockdown in India – the world’s largest – over the coronavirus pandemic is wreaking havoc on thousands of migrant workers in the capital, New Delhi.

With few transport options available, thousands of people, mostly young male day labourers but also families, have resorted to commuting on foot during the 21 days lockdown that started on Wednesday.

UN Secretary-General Antonio Guterres announced the donation of the 250,000 masks, which had just been located in United Nations storage facilities, to the United States for use in hard-hit New York City.

The city’s Mayor Bill De Blasio hailed the UN for “answering the call” for the city where the insitution’s headquarters are located.

Guterres said in statement the United Nations and the US Mission to the UN were working with de Blasio’s office to ensure swift delivery of the masks to medical facilities around New York. 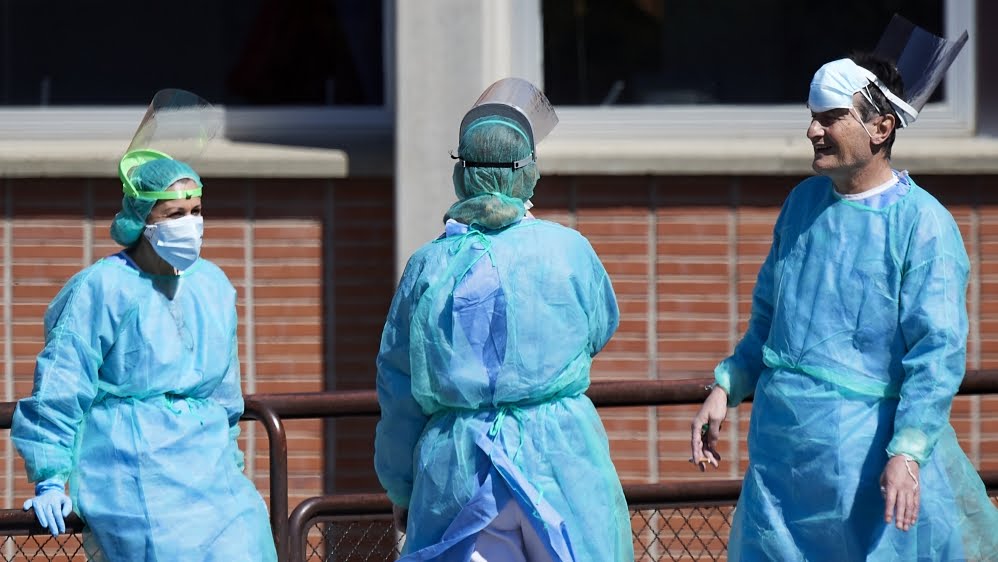 Spain toughened its nationwide lockdown on Saturday, halting all non-essential activities as it stepped up its fight against the deadly coronavirus epidemic that has so far claimed 5,690 lives.

Spain has the world’s second-highest coronavirus death toll after Italy, losing another 832 people over the last 24 hours as the number of cases soared to 72,248.

Despite the grim 24-hour death toll, health chiefs said the rate of infections was slowing, suggesting that the epidemic was nearing its peak.

But the strain on intensive care facilities was a big source of concern, with the greatest pressure expected in about a week’s time, prompting the government to lift the restrictions to slow the contagion.

The total number of coronavirus cases in Israel has reached 3,619, as 159 more people tested positive, according to country’s health ministry.

At least 12 people have so far died of the virus, with 54 patients in a critical condition and 89 recoveries, a ministry statement said.

As part of measures to stem the spread of the coronavirus, all schools in the country have been closed all meetings in open or closed areas with more than 10 people have also been banned.

The global death toll from the coronavirus surpassed 30,000 on Saturday, according to data compiled by the US-based Johns Hopkins University.

The virus known as COVID-19, which emerged in Wuhan, China last December, has spread to at least 177 countries and regions around the globe, with a total of 649,904 confirmed cases worldwide and 30,249 deaths.

Italy, Spain, China and Iran continue to be the most affected countries in terms of deaths, but the US tops the list of the highest number of confirmed cases – 115,547.

French health authorities reported 319 new deaths from the coronavirus, up 16 percent on the previous day and taking the total to 2,314, as the government scrambled to increase the number of intensive care beds nationwide.

The daily government tally only accounts for those dying in hospital but authorities say they will be able to compile data on deaths in retirement homes from next week, which is likely to result in a big increase in registered fatalities.

The number of known cases of infection rose to 37,575 on Saturday from 32,964 a day earlier, the health authority said.

“I want to say how things are with clarity and frankness. The battle is only starting,” said Prime Minister Edouard Philippe at a news conference with Health Minister Olivier Veran to outline the government’s strategy.

“The first 15 days of April will be even more difficult than the 15 days that are coming to an end now,” Philippe said.

Coronavirus has now spread to dozens of countries in Africa, with 2,650 infected and 49 dead, the head of the World Health Organization (WHO) said.

The WHO stands ready to support all countries in the fight against the virus, Tedros Adhanom Ghebreyesus, WHO director-general, said on Twitter.

Countries with weaker health systems must act aggressively to contain spread among early cases and prevent community transmission, he said.

A statement from Qatar’s Communications Office has shed light on the conditions of Bahraini citizens, who were transiting home from Iran. The 31 Bahrainis, whose government has not yet sent a charter plane to fly them back, have all been tested for coronavirus and are staying at a quarantine hotel in Doha.

The full statement is below:

“On 27 March 2020, 31 Bahraini citizens arrived in Doha on a Qatar Airways flight from Iran. As Bahrain does not allow commercial flights from Qatar, the State of Qatar inquired with officials in Bahrain as to how Qatar could assist in the travelers’ efforts to return home.

As the health and safety of all individuals in Qatar, and around the world, is paramount at this time, the Ministry of Public Health has administered coronavirus tests for the 31 Bahraini citizens and provided them with accommodation in a quarantine hotel at no cost to them or the government of Bahrain. Those testing positive will receive free and full health care at once. Those testing negative will continue to observe self-isolation for two weeks at a quarantine hotel, at no expense to them.

It is our hope that by the end of this two-week quarantine, that the government of Bahrain will allow their citizens to return home. If not, we will continue to provide them with hospitality and care.”

Ireland has reported 14 deaths from COVID-19 infections, all in the east of the country and the most on a single day so far to bring the total number of fatalities to 36, the department of health said.

The country also reported an additional 294 confirmed cases of coronavirus to bring the total to 2,415, the department said in a statement, slightly down on the 302 new cases reported on Friday when Ireland announced further restrictions for citizens.

President Donald Trump said he was considering imposing a two-week quarantine on New York as well as portions of New Jersey and Connecticut as part of further efforts to stem the spread of the coronavirus.

Trump said he was considering placing a two-week enforced quarantine on New York, which he called a “hot spot,” at some point later on Saturday. The quarantine might also apply to parts of New Jersey and Connecticut.

“This would be an enforceable quarantine,” Trump said from the White House. “I’d rather not do it, but we may need it.”

The number of coronavirus cases reached over 52,000 in New York, the US epicentre of the outbreak, New York Governor Andrew Cuomo said Saturday.

By Saturday afternoon, the sum of total known coronavirus US cases had soared to 115,842, eclipsing the toll the disease has taken on China and Italy.

The toll in Italy, which has suffered more deaths than any other country, now stands at 10,023. An additional 5,974 infections brought to 92,472 the number of people who have officially tested positive for COVID-19 in Italy since the crisis began last month.

Latest figures provided by the civil protection department, however, showed that both the daily death rate and the increase in contagion cases grew a bit slower than Friday.

Current contagions rose by 5 percent to reach 70,065, compared with a 7 percent rise on Friday. The total number of recovered people reached 12,384.

Turkey’s death toll from the coronavirus increased by 16 to 108 on Saturday, as the number of confirmed cases rose by 1,704 to 7,402, Health Minister Fahrettin Koca said.

He added on Twitter that 7,641 tests had been conducted in the last 24 hours, bringing the total number of tests carried out in Turkey to 55,464 since the outbreak begun.

Upload your sounds, music, podcasts to the world through the fastest growing African music social media, this gives you the opportunity to connect with your potential listeners, it is free,easy and fast.
Explore new music and download if available for free or buy using buy link on individual tracks, discover new people that are interested in your kinds of music and engage with your favorite artist, Share your favorite music with your friends on social media, be the first to discover and start a trend as music are released by artists, engage in a conversation with artists and other fans of artists in the comment section

Subscribe to our newsletter and get latest updates and offers.

Are you sure you want to clear your queue?

Please select the language(s) of the music you listen to.